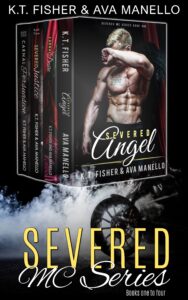 🏍🏍Severed MC Box Set🏍🏍
Get all the MC action from the Severed MC books in this one fabulous box set! Now available in kindleunlimited Get it on Amazon: http://geni.us/SeveredBox
This isn’t 1% MC or SOA, it’s a story full of suspense and twists, brotherhood and family with some hot romance thrown into the mix.
Danger is around every corner, as Eve quickly learns when she’s exposed to the world of Severed MC. When a crime unfolds in front of her, she is swept up in the fast paced, adrenaline rush that is club life so they can keep her alive. Angel and Eve’s nail-biting story unfolds across ‘Severed Angel’ and ‘Carnal Desire’ with angst, lust and a healthy dose of revenge. Eve has no idea of the risk Satan poses to her and her two-year-old daughter while Angel has no idea if he’s done enough to protect her from it. Angel’s club brother Ink would stand by him no matter what, but will he finally get the woman he deserves? The chaos and fireworks return in ‘Severed Justice’ and ‘Carnal Persuasion’. When hotblooded newcomer Justice stirs things up, the town of Severed are in for one hell of a ride and Cowboy wrestles with demons that just might have beaten him. When the innocent citizens of Severed are tangled in the middle of a war, can the MC save them or are there just some battles that can’t be won? Be ready to have your mind blown and your emotions left in tatters. Welcome to the world of the Severed MC.
Amazon 5 Star review for Severed Angel: Wow this story has it all, great story, plot, amazing characters, great amount of angst, lots of hot sex, and a very sweet romance. There are some serious tragic moments but it’s all part of this great MC read, and I devoured this story.
#MCRomance #kindleunlimited #AustralianMC #AvaManello
Get it on Amazon: http://geni.us/SeveredBox

This series was my first introduction to the MC world and I wilL never be looking back! I love the intricacy of the storyline, with a wonderful combination of lusty moments, MC loyalty and nail biting apprehension. These ladies have done such a great job of showing the fierce loyalty of club life and the way these guys love with their entire beings. This series made me think of MC’s as more than the stereotypes of ruthless criminals – Severed MC showed that bikers can be loyal, loving, protective and even chivalrous! I’d highly recommended this series to anyone who wants excitement, lust, fear and a fair few surprise twists in their life!