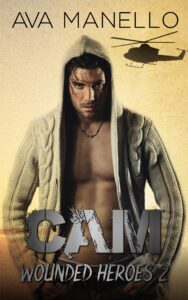 Amazon: http://geni.us/CamWH
Fate’s been cruel to Sarah Kennedy. Not once, but twice, her future has been altered by the turn of a card. Believing she’s been abandoned by everyone she cares for, and barely holding on to her sanity, she finds herself caught up in a battle of wills between two men.
Luckily for her one of them is Cam. He vows to keep her safe from harm. Little do they know how hard that promise will be to keep. With no hope of escape Cam calls on Declan and his fellow Wounded Heroes for assistance.
What follows is a crazy, violent adventure that could cost them all their lives. But then, these are the Wounded Heroes, and they’ve never shied away from a conflict before.
Can be read as a standalone or as part of series.
#MilitaryRomance #AvaManello

I couldn’t wait for this book to come out. Oh boy Cam did not disappoint. I had all the feels but that ending…..was just perfect. I’ve actually been left speechless…. In a very good way.